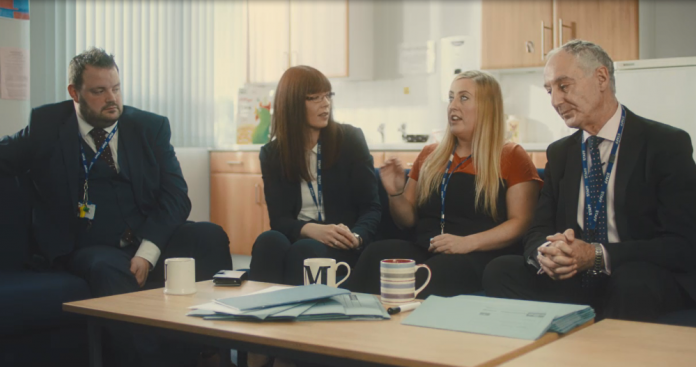 Four Bury teachers have been selected to star in Kellogg’s latest TV advert to tell the nation when they eat their Corn Flakes.

Robert Margolis, Lynn Trovoost, James Holt and Millie Hall from The Derby High School, Radcliffe Road were handpicked for one of eight slots in the cereal giant’s latest ad after proving they were among Corn Flakes biggest fans.

For the last 12 months Kellogg’s has been asking the nation how they eat their Corn Flakes, now they want to know when.

Whether it is in the mornings before work or with warm milk just before bed, Kellogg’s received a passionate response from cereal super fans on social media.

The group were whittled down from hundreds of applicants in an intensive interview process and a cast screening. Amusingly the secondary school teachers were selected for passionately disagreeing on the best time to eat their Corn Flakes.

Coordinator of Dance and Drama, Millie Hall, 29, who enjoys hers as a snack in the evenings, said: “It’s all about getting your onesie on and having the comfort of your Kellogg’s Corn Flakes in the evening.

“It caused quite a debate among the team as we all like to have them differently – the crew filmed for three hours in total and by the end we were all howling, and the crew were joining in the debate too.”

Excited to be part of Kellogg’s history, head of expressive arts, James Holt and assistant head, Lynn Trovoost both described the nostalgia of bowl of Kellogg’s Corn Flakes.

James, 33, said: “I have mine at morning break times, gives me chance to zone out the busy day for five minutes. Takes me back to playing the games and puzzles on the back of pack and eating them when I was younger.”

Mother-of-three, Lynn, 41, added: “There really isn’t anything quite like a bowl of Kellogg’s Corn Flakes. You’ve got to have a box in the cupboard. I always eat mine on the way to work. Bowl in my car foot well, eaten parked up, quickly between school drop-offs. ”

In October an 18 person film crew descended on the staff room at The Derby High School.

“It was really exciting to watch the crew transform our staffroom into a bright colourful room.

“We can’t wait for the kids to see it on the TV, I think for many of them they don’t see our social identities and just think of us as their teachers – so it will be funny to see their reaction. So long as we don’t embarrass ourselves we may have to do a screening in assembly to showcase our debut!”

The ad campaign will feature a cast of eight real families, friends and work colleagues –all genuine fans – talking about when to eat the ‘perfect bowl’ of Corn Flakes – and will debut on prime time on Christmas Eve.

The decision to launch the nine month campaign comes as a natural progression of the 2017 debate, when the cereal giant asked genuine fans; ‘what’s your perfect bowl?’

Last year’s campaign launched after a six year break in commercial advertising for the breakfast cereal – and even had Father Christmas telling the nation how he eats his Corn Flakes.

A spokesperson from Kellogg’s, said: “We have had great fun opening up the Corn Flakes debate and now we want to take it a step further, our cast remind people what they love about this iconic cereal and how it doesn’t just have to be enjoyed at breakfast.

“We have seen a change in how people are eating cereal but also in what they are having for breakfast. Therefore we wanted to capture how our customers are eating Kellogg’s Corn Flakes.”

Meet your future-Behind-the-scenes access to the world of work to be offered to 1,000...

Stockport students to run summer school in a field