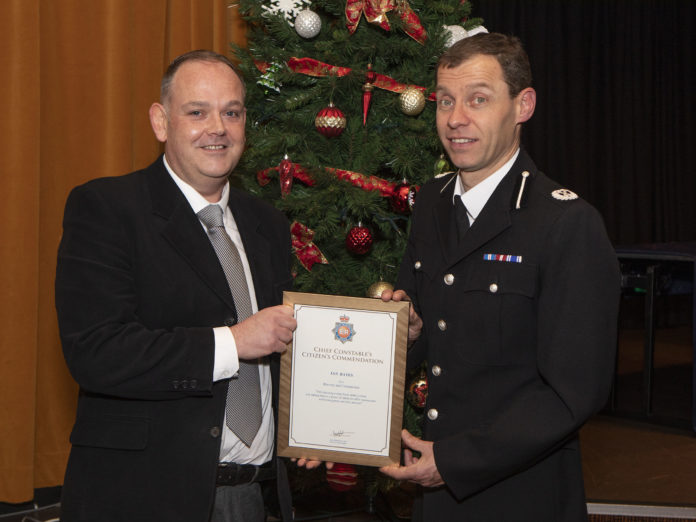 A member of the public has been commended for outstanding bravery by Greater Manchester Police (GMP).

Ian Bates has been presented with a Chief Constable’s Citizen’s Commendation for bravery and compassion at the latest GMP awards evening on Tuesday 10 December.

In July earlier this year, Ian Bates was on his usual commute into work, waiting for a tram to pass so he could cross the tracks. As he was waiting, a man looked at Ian before throwing himself under the coming double tram. Instead of running from the incident unfolding like the others around him, Ian took action.

Ian was able to pull the man from under the tram and take him to a safe place until the emergency services arrived.

Ian Bates said: “On the day the incident happened, I didn’t think about what I was doing, I just knew I needed to help.

“The officers were on scene really quickly, and were great in helping me keep the gentleman calm and reassured until further support arrived. I would also like to say thank you to the Chief for my award, and ACC Potts for presenting it to me on the night.

“I really enjoyed the award ceremony and it was a proud night for me and my wife. I am glad I was able to help at such a vulnerable time in a person’s life, and it is good to know he is being given care and support following what happened.”

Officers on scene were blown away by Ian’s professionalism and ability to keep calm, he was continuously reassuring the injured man and providing vital information so quickly.

Assistant Chief Constable Rob Potts awarded Ian on the night, and said: “Without the help of Ian, there is no doubt the situation at Victoria would have had a very different outcome.

“The officers on the scene couldn’t commend his actions and help on the day enough. Not only did he pull the man to safety, he stayed with him throughout, offering reassurance when it was needed the most.

“I am also extremely pleased the victim is now receiving the help he needs.”