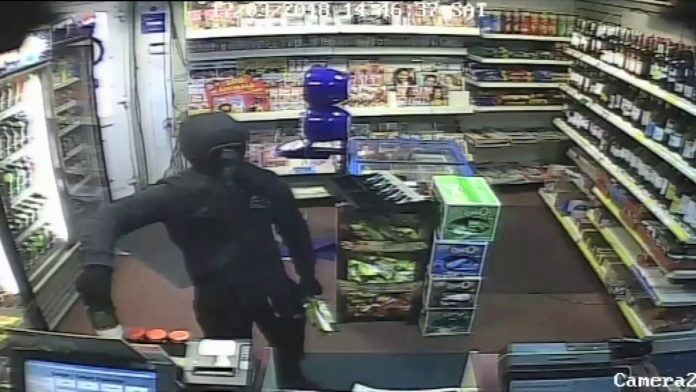 Police are appealing for information following the attempted robbery at Premier Wines on Royle Green Road, Northenden, on Sunday 22 April.

A staff member was working in the shop alone when two men entered the premises around 2.30 in the afternoon.

One was carrying a crowbar and threatened him, before demanding cash from the till.

The staff member picked up a can of multi-purpose oil spray from behind the counter and began to spray it at the offenders.The second offender then picked up a bottle of wine from the shelf and threw it at the shop worker.The bottle narrowly missed and hit a display cabinet containing spirits.

The offenders made off on foot, empty handed, in the direction of Patterdale Drive and Palatine Road.

Detectives investigating the incident have released CCTV footage in a bid to get the public to come forward with information.

Detective Constable Christopher Clarke of GMP’s City Division, said: “This was a cowardly attempt to steal the hard-earned profits from a local business.

“The shop worker has shown immense bravery resisting the robbers armed only with a can of oil spray.

“The offenders responsible would have smelt very strongly of chemicals afterwards and we ask anyone who knows their identity, or has any information about this crime, to contact police immediately.”

“She was the most precious and closest person we had”-Tributes paid to murdered mother...