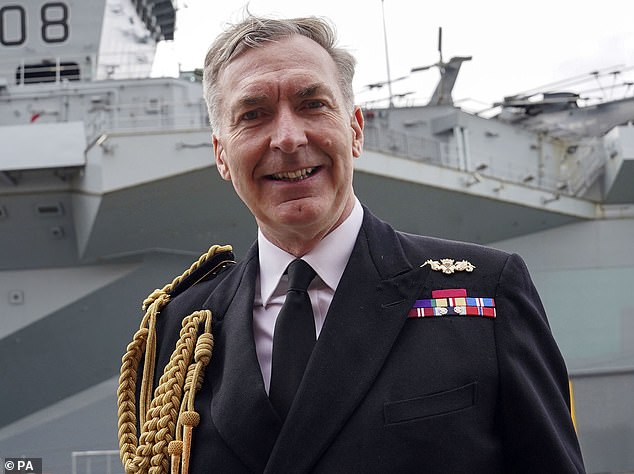 Admiral Sir Tony Radakin will replace General Sir Nick Carter as Chief of the Defence Staff at the end of November, and is the first head of the Royal Navy in two decades to take on the post.

Commissioned in 1990, his operational service has involved the Iran/Iraq Tanker War, security duties in the Falklands, NATO embargo operations in the Adriatic, countering smuggling in Hong Kong and the Caribbean, and three command tours in Iraq – both ashore and at sea.

He has commanded from Lieutenant to Rear Admiral of ashore, afloat and international forces. This includes HMS BLAZER and Southampton URNU, HMS NORFOLK, the Naval Training Team in Iraq, the Iraqi Maritime Task Force, Portsmouth Naval Base, and Commander of UK Maritime Forces and NATO’s High Readiness Maritime Component Commander.

His staff appointments have predominantly been in either Joint or Defence roles, including: operational planning at PJHQ, two tours as a Military Assistant, and two tours involving financial, capability and strategic force development. More recently, he was Chief of Staff of the Joint Forces Command (2016 – 2018) and Second Sea Lord (2018 – 2019).

His education includes: reading law at Southampton University, qualifying as a barrister, an MA in International Relations and Defence Studies, the Higher Command and Staff Course, and the London Business School’s Senior Executive Programme. He has also graduated from several US courses including the US Combined Forces Maritime Component Course, CAPSTONE and the inaugural UK/US Future Leaders’ Course.

One of his last acts as Head of the Navy was to authorised a British warship from the Queen Elizabeth aircraft carrier strike group to sail through the Taiwan Strait.

He lives in Hampshire with his wife and four sons (born between 1998 and 2005). He plays squash and enjoys sailing, mountain biking and skiing. He is president of the Royal Navy Squash Association and the UK Armed Forces Tennis Association.

Government unveils plans for the next session of Parliament

Handgun and ammunition found near to church steps in Levenshulme