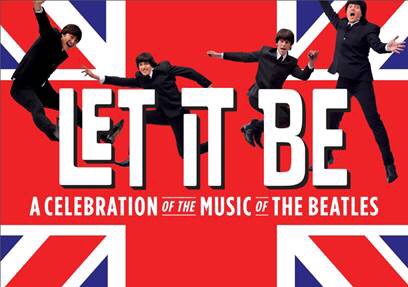 LET IT BE will Twist and Shout its way into Manchester’s Opera House for eight (days a week!) performances, running from Monday, 29 February through to Saturday, 5 March.

The show arrives in Manchester just days before the 46th anniversary since Let It Be was released as a single back on 6 March 1970. The song was penned and sung by Paul McCartney. And in April 1971, The Beatles won an Oscar for Let It Be as the Best Original Song Score.

The Beatles had a strong following in Manchester. Located just 35 miles down the Long and Winding Road from the Fab Four’s home town of Liverpool, The Beatles performed in Manchester numerous times in the early days of their illustrious career.

It is believed that The Beatles’ first real gig in Manchester was at the Oasis Club on 2 February 1962. The band later returned to the city many times, which included their only appearance at Oxford Street’s Odeon Cinema on 30 May 1963, which was also the 12th date of the group’s UK tour with Roy Orbison.

Following Manchester, the next tour date in the North West of England is at Blackpool’s Grand Theatre from Monday, 28 March, to Saturday, 2 April, again with eight performances. The Beatles also performed in the seaside town, playing Blackpool Opera House twice within one month on 26 July 1964 and 16 August 1964.

A cast of talented musicians will take to stages across the country as the Fab Four, wowing audiences with their effortless and indistinguishable portrayal as John, Paul, George and Ringo. The performers have already toured the show to some of the biggest stages in the world including Broadway.

The cast are Paul Canning and Reuven Gershon (John Lennon); Emanuele Angeletti and Iain Hornal (Paul McCartney); John Brosnan and Paul Mannion (George Harrison); Luke Roberts and Stuart Wilkinson (Ringo Starr). The band will be joined on stage throughout the tour by Michael Bramwell on keyboards.

Producer Jeff Parry from Annerin Productions commented: “What a fantastic start to the biggest ever tour of LET IT BE, we’re delighted. The reviews have been absolutely glowing and we’re only four weeks into a seven-month tour. We still have a long way to go and everyone involved in the show is extremely excited for what the coming months hold.

The show has already wowed London’s West End and New York’s Broadway audiences. It recently completed a five-week run in the birthplace of the biggest band in the world, Liverpool, where it enjoyed 5-star rave reviews and sell-out performances at Royal Court Theatre Liverpool. The Liverpool run coincided with what would have been John Lennon’s 75th Birthday, breaking box office records at Royal Court Theatre Liverpool as the venue’s fastest selling show.