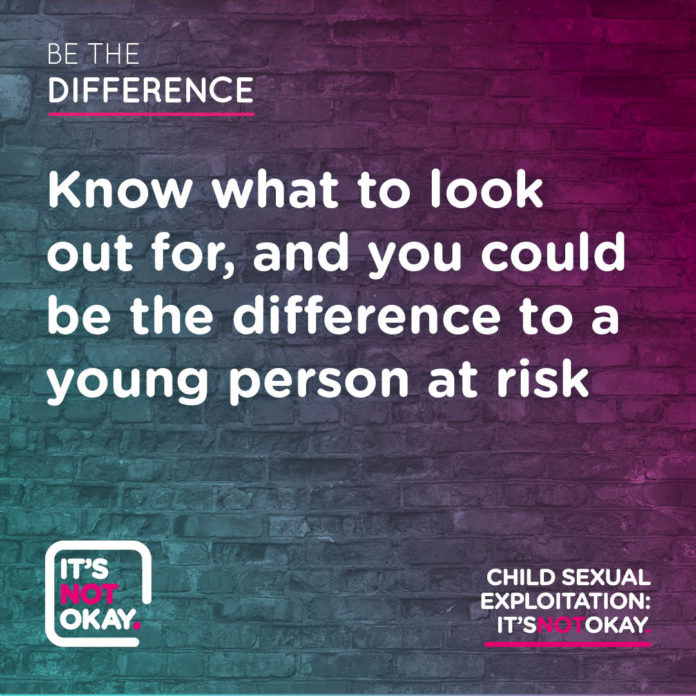 One person can have a significant impact in helping a young person who may be at risk, whether this is a peer, parent, carer or member of the local community.

This week sees the start of a campaign which is taking place across Greater Manchester to raise awareness of child exploitation, with local communities being encouraged to consider if they have the knowledge and confidence to ‘Be the Difference’.

The week of action looks to raise awareness of exploitation amongst young people to educate and inform them on the signs to look out for, how to report concerns and how they can support their peers. The activity is also aimed at parents, carers, professionals and community members to help further understand child exploitation, and increase confidence and knowledge of how to support young people who may be at risk.

Wednesday 18 March is the National Child Exploitation (CSE) Awareness Day, so there will be a focus on CSE in line with this throughout the week.

Karen* found inappropriate messages on her 12-year-old daughters phone and is now helping raise awareness to protect other young people.

When asked what advice she would give to other parents, she added: “I know it’s daunting, and I know it’s really scary and hard to accept that your child has gone through something like that, but you need to persevere and you need to stay strong for them.

“You need to just keep reminding them that it’s not their fault – that you love them no matter what, you are always going to be there for them and let them know how proud you are they are doing this because they can help to stop it from happening to someone else.”

Karen* was the difference for her daughter, and together they want to raise awareness of spotting the signs and reassure other people going through this by giving an insight into their experience to help protect other young people.

The week of action will begin with an emotive drama performance created by Essential Safeguarding and Safe Productions known as ‘Real Voices’. The impactful performance explores the lives of four young people who have all been groomed and exploited, and the impact this has had on their lives.

The performance is followed by a workshop to help further understanding of exploitation and encourages young people to think about themselves, and also their peers who may need support.

There will be five performances over the week at multiple sites across Greater Manchester, targeting not only young people but foster carers, teachers and parents too.

The Greater Manchester Complex Safeguarding Central Hub has also created an opportunity for a young person to give a first-hand account of exploitation in partnership with Unity Radio as part of the week of action. Funding has been provided for the young person to take part in lyric writing sessions to produce a rap to increase awareness of child exploitation, and explore how things/people could ‘Be the Difference’ for young people.

The young person described the opportunity as ‘a dream come true’ and the rap will be played on Unity Radio throughout the week. To further support this, a discussion around child exploitation will be taking place NGY (Next Generation Youth) Show on Unity Radio on Thursday 19 March from 7pm.

Other activity across the week throughout Greater Manchester includes thought provoking performances from GW Theatre Company with Mr Shapeshifter. This encourages learning around child sexual exploitation to inform and safeguard children against risk and danger in ‘real’ life and online, aimed at 9-11 year olds, and will take place at multiple schools across the region. There will also be performances from Breaking Barriers which is a one person play known as ‘Crossing the Line’ which looks at child criminal exploitation from the perspective of a young person at schools across Greater Manchester, throughout the week of action and beyond. Each of the districts across Greater Manchester have also organised activities to help raise awareness across local communities.

“The exploitation of children is often hidden and not reported which is why we are asking for help from the public, professionals, parents, carers, teachers and anyone else who comes into contact with children to report any concerns that they may have. Something that doesn’t seem to be quite right very often isn’t. We are asking members of the community in Greater Manchester to ‘Be the Difference’ to speak out about anything they suspect may be happening that could harm a child.

“The week of action involves a whole range of different events across Greater Manchester from Theatre Productions in Schools, to sporting events, a younger person producing rap music and engagement with service industries such as hotels, bars and takeaways all designed to raise awareness and encourage people to ‘Be the difference’ and to have the confidence to report any concerns that they may have.

“It is crucial that communities across Greater Manchester fully understand the many forms that exploitation can take and are able to recognise the signs. We encourage victims and anyone acting on their behalf to come forward in the knowledge that their reports will be taken seriously and that specialist support is available.”

Deputy Mayor of Greater Manchester, Bev Hughes, said: “Every child and young person deserves a childhood that is free from fear and abuse. As part of this campaign, and through the activity planned throughout this week of action, we want to empower people to be the difference in a young person’s life. Whether a teacher, carer, parent, we all have a responsibility to keep children and young people safe by being aware of the signs that they may be being sexually exploited, and taking action to safeguard and support them.

“During the week, there will a wealth of activities to raise awareness of the continuing work across Greater Manchester to tackle exploitation, protect children and young people and bring abusers to justice. This includes thought-provoking drama performances to get young people talking about the issue, and being aware of how they or their friends could be affected.

“My plea to the people of Greater Manchester is, please, look out for any signs that young people in your life are behaving differently than usual, and if you have concerns don’t be afraid to speak out.”

If you have concerns regarding child exploitation, contact the police directly on 101 or via LiveChat. If you or someone you know is in immediate danger, dial 999. Alternatively call Crimestoppers anonymously on 0800 555 111.

*Name changed to protect the identity of the individuals.