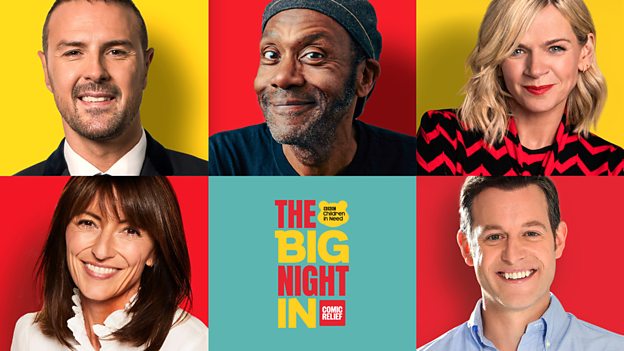 The three-hour extravaganza hosted by Davina McCall, Lenny Henry, Matt Baker, Paddy McGuinness and Zoe Ball featured an incredible array of famous faces who offered some light relief and entertainment whilst celebrating and rewarding those going the extra mile to support their communities in these troubled times.

The Prince of Wales and Duchess of Cornwall, and The Duke and Duchess of Cambridge and their Royal Highnesses Prince George, Princess Charlotte and Prince Louis all made a very special appearance during The Big Night In to join the nation in the weekly ‘Clap For Our Carers’ dedicated to all NHS and frontline workers and carers. And Prince William featured in an exclusive Blackadder sketch alongside Stephen Fry who played the role of Lord Melchett (the grandson of his famous character General Melchett) to telephone the Duke of Cambridge and offer him some advice on how to home-school his young family.

Prince William featured in an exclusive Blackadder comedy sketch starring Stephen Fry as the grandson of the his iconic character General Melchett counselling the Duke on home-schooling via a video call. Written by the show’s co-creator, Richard Curtis, the piece concluded with The Duke and Duchess of Cambridge and their Royal Highnesses Prince George, Princess Charlotte and Prince Louis gathering outside their family home to join the nation in the weekly ‘Clap for our Carers’ – dedicated to all NHS and frontline workers and carers.

Every penny generously donated to The Big Night In by the public will be split equally between Comic Relief and BBC Children in Need and will go on to support local charities and projects in the UK, so they can continue to provide vital emergency support.

Appeal films looked at the devastating impact that Covid-19 has had on families up and down the country and the vital work partners are doing to help. The films tackled hunger, domestic violence and isolation and showed how everyday heroes are stepping up to get medicines and food to those who can’t leave the house.

The real stars of the night however have been the children and adults of all ages who shared their stories and brought to life how money raised this evening will go on to make a difference to people in urgent need of support across the UK. One of the films featured Sam, who is on the autism spectrum, with severe sensory issues which can overload him. When he was just six years old, Sam was diagnosed with severe depression and anxiety. In 2018, his life was transformed with the arrival of Willow, an autism assistance dog whose training was funded by BBC Children in Need. The fear and isolation of Coronavirus means that Sam’s anxiety has returned and his film highlighted why he needs his best friend now more than ever.

The elderly are amongst the most vulnerable and most impacted by the current crisis, and our film telling the story of 94 year old Brin, who has been self-isolating, was a prime example. The Comic Relief funded project ‘United Welsh Group’ works to bring the outside world to Brin and other elderly people in the community, including an intergenerational choir with local school children, helping combat loneliness and isolation. Since the pandemic, the choir has had to stop, but the children involved in the project have been writing letters and sending messages to their older friends and helping drop off care packages. The film highlights how this support through such difficult times is an absolute lifeline.

Charlotte Moore, Director BBC Content says: “It was a real joy to see Comic Relief and Children in Need come together in this time of need for a wonderful evening of entertainment to help the nation laugh. I would like to say a special thanks to Richard Curtis and to all those involved for pulling the whole three hour show together at break neck speed and in such challenging circumstances. And to the British public for their incredible generosity at this time.”

Manchester Culture Awards are back for a second year