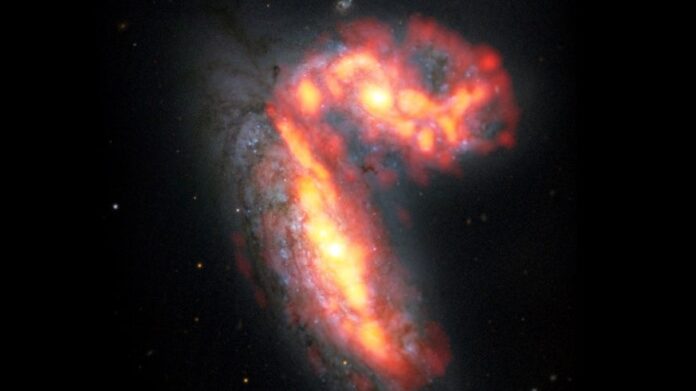 Scientists have provided the clearest evidence yet of the processes that are killing off galaxies in nearby regions of the Universe.

In a new paper released today, an international team of astronomers say the galaxies are being robbed of their molecular gas – the fuel needed to birth new stars – in a process that has, up until now, remained a mystery.

Using the Atacama Large Millimeter/submillimeter Array (ALMA) of telescopes in Chile, the team has been able to capture detailed images of the Virgo Cluster, located over 65m light-years away from Earth, and determine, for the first time, the precise processes that are killing off its galaxies.

The team has shown that a mechanism known as gas stripping is reaching far into the galaxies within the Virgo Cluster to disturb and perturb their molecular gas and impact their star formation.

The findings are set to be published in the journal Astrophysical Journal Supplement Series and have been uploaded to arXiv.

A galaxy’s ability to form stars is influenced by where the galaxy lives in the Universe and how it interacts with its surroundings. Of the many different environments in the Universe, galaxy clusters are among the most massive, hottest, and most extreme.

“Gas stripping is one of the most spectacular and violent external mechanisms that can shut down star formation in galaxies,” said lead author of the paper Dr Toby Brown, from the National Research Council of Canada.

“Gas stripping occurs when galaxies are moving so fast through hot plasma in the cluster, that vast quantities of cold molecular gas are stripped from the galaxy – as though the gas is being swept away by a huge cosmic broom.”

The team were able to capture images of a total of 51 galaxies in the Virgo Cluster and observed the process of gas stripping occurring in the majority of them.

“The nearby Virgo Cluster is seven million light-years across and contains thousands of galaxies hurtling through superheated plasma at speeds of up to several million kilometers-per-hour,” said co-author of the study Dr Tim Davis, from Cardiff University’s School of Physics and Astronomy.

“It is an environment so extreme and inhospitable that entire galaxies can be stopped from forming stars in a process known as galaxy quenching.

“However, there is no need to worry as our Milky Way galaxy is nowhere near the Virgo cluster, or any cluster for that matter, so we’re not in danger.”

The new results form part of the Virgo Environment Traced in Carbon Monoxide (VERTICO) Survey, a large program using the ALMA telescope, which is celebrating its tenth birthday this month. ALMA is run as a joint venture by a consortium of European countries (including the UK), along with the USA, Canada, Japan, Taiwan and Chile.

The latest VERTICO observations were taken between July 2019 and April 2021, and with more set for the future, the team are hopeful of revealing more insights into how star formation and galaxy evolution proceed in the most extreme environments in the Universe, which will in turn help us better understand our own galaxy.

“The first study of molecular gas in the Virgo cluster was published over 30 years ago, and astronomers have been debating about the influence of the cluster environment on this star-forming gas ever since,” said Dr Christine Wilson, Distinguished University Professor at McMaster University and co-principal investigator on the VERTICO project.

“I’m confident that the VERTICO data will allow us to answer this long-standing question, as well as to understand exactly how these various environmental effects cause cluster galaxies to shut down their star formation production line.”

How the development of skulls and beaks made Darwin’s famous finches one of the...