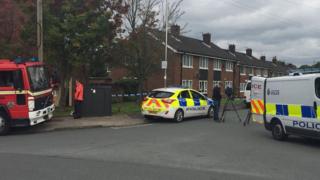 An armed siege that the police have been dealing with for most of the day in Stockport has come to an end this evening.

The incident began at 8.25 this morning is taking at a property on Parry Mead in Woodley.

Police were searching for a man who was wanted on a recall to prison.

A 39-year-old man inside the property, refused to engage with officers and was armed with weapons, believed to be a knife and a baseball bat.

Specially trained police negotiators spent the attempting to engage with the man at the scene where a man and a woman were  inside the address with the man.

Shortly after 5.00pm, two men and a woman were taken to hospital for assessment.