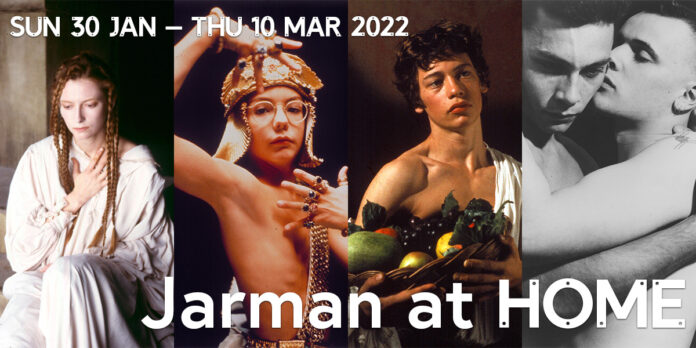 HOME has announced a retrospective of one of the most influential figures in contemporary British culture as part of a collaboration with Manchester Art Gallery and their upcoming Protest! exhibition.

A set designer, author, gardener and filmmaker who merged avant-garde practices with a painterly approach to cinema composition and framing, Derek Jarman was also a pivotal and pioneering figure in gay rights activism.

Opening on the eve of what would have been his 80th birthday, Jarman at HOME comprises all of the director’s 11 feature films in addition to 11 short films, presented chronologically over six weeks with special guests and speakers due to attend several screenings.

Curated by Rachel Hayward, Head of Film and Jason Wood, Creative Director: Film & Culture, the season opens with a compilation of Jarman’s Super 8 shorts, including his first film Studio Bankside (1972), and closes with a special triple-bill screening comprising: Glitterbug, a compilation of Super 8 fragments posthumously assembled by Jarman’s friends in 1994;

The Queen is Dead made in 1986 as a music video for The Smiths’ song of the same name; and, Mark Jordan’s Leaving Time: The Art of Derek Jarman (2020), which features the director in his studio discussing morality, the tabloid press and the terminology applied to people’s sexuality.

Jarman’s collaborations with key musicians of the day are reflected elsewhere in the programme, from Sebastiane (1976), his first feature which boasts a distinctly moving score from Brian Eno, to his final film, Blue (1993) featuring a highly textured soundscape from renowned musicians including Simon Fisher Turner, Coil, Scanner and Brian Eno. Jubilee (1978), Jarman’s provocative account of the punk movement, starring a host of punk rockers including Adam Ant and Toyah Willcox will also screen, followed by a post-screening Q&A with lead actor and punk rock icon, Jordan, on Saturday 5 February.

Further special guests introducing screenings include: Writer-Director Francis Lee (God’s Own Country, Ammonite) who will introduce Caravaggio (1986), Jarman’s renowned biopic of the Italian Baroque painter which was the film debut of Sean Bean and frequent Jarman collaborator Tilda Swinton; friend and long-time Jarman collaborator James Mackay who produced three of the shorts screening in the opening night Super 8 compilation will participate in a Q&A following the screening on Sunday 30 January; and, Adelle Stripe, author of Black Teeth and a Brilliant Smile, who will introduce the closing night triple-bill programme.

In addition, The Garden (1990), a visual tour de force shot inside Jarman’s sparsely furnished home on the windswept Dungeness coastline, will screen with a recorded introduction from filmmakers and visual artists Andrew Kötting and Eden Kötting (This Our Still Life), while The Angelic Conversation (1985), Jarman’s tender non-narrative piece featuring Shakespeare’s sonnets read by Judi Dench, will be preceded by an audio introduction from director Mark Cousins (The Storms of Jeremy Thomas).

Also in the programme, War Requiem (1989) evokes Benjamin Britten’s choral and orchestral masterpiece illustrating the true horrors of war and stars Laurence Olivier in his last ever role, while The Last of England (1987), made just after Jarman was diagnosed with HIV presents an angry, Blake-like vision of Thatcher’s England in turmoil, and Jarman’s penultimate feature, the bold offbeat biopic Wittgenstein (1993), addresses the politics and sexuality of the renowned philosopher.

Co-Curator Rachel Hayward, Head of Film at HOME, who will introduce the screening of Sebastiane on Tuesday 1 February, comments:

“Filmmaker. Artist. Set designer. Author. Gardener. Activist. Jarman was a true polymath and we are delighted to be hosting this extensive retrospective of one of the most influential figures in contemporary British culture. We look forward to screening all of Jarman’s 11 feature films to our audiences, alongside some lesser-known short films, and we encourage people to also check out the brilliant Protest! exhibition at Manchester Art Gallery to be fully immersed in the world of Derek Jarman.”

Co-Curator Jason Wood, Creative Director: Film & Culture at HOME, who will introduce the screening of Wittgenstein on Sunday 6 March, comments:

“It’s an honour to again link up with Manchester Art Gallery following our previous collaboration on True Faith and to celebrate a polymath figure whose astonishing career operated at the intersection of art, culture, politics and identity. Jarman’s films remain as vital and potent today as they were at the time of their release and we are thrilled to present them anew and with some very exciting artists to help contextualise them.”

The retrospective runs alongside Manchester Art Gallery’s Protest! exhibition which marks the first time the diverse strands of Jarman’s practice – as painter, writer, filmmaker, set-designer, gardener, political activist – have been brought together in over 20 years, since the significant exhibition of his work at the Barbican, London, in 1996.

Alongside the best new independent film releases, HOME’s 2022 film programme will be packed with retrospectives, special seasons and one-off screenings, full details of which will be announced in due course. Some confirmed highlights include:

– British Writers/ Nigel Kneale: Into the Unknown (Wed 5 Jan – Tue 25 Jan) – honouring the centenary of the birth of legendary screenwriter Nigel Kneale, HOME’s annual screenwriter in focus season is devoted to Kneale’s work. Well-known for his work in the field of science fiction on television, Kneale was also a master of adaptation with this season presenting some surprising and well-known examples of his screenwriting work. Feature films screening include a trio of Hammer Films classics – The Abominable Snowman (1957), The Witches (1966), Quatermass and the Pit (1967) – as well as his two adaptations of John Osborne plays, Look Back in Anger (1959) and The Entertainer (1960). His renowned TV adaptations that will also screen include: Nineteen Eighty-Four (1954); Wuthering Heights (1962); and, The Woman in Black (1989)

– The Cult Film strand will return with Tommy Wiseau’s contemporary cult classic The Room (2003), screening for the first time ever at HOME on Friday 28 January