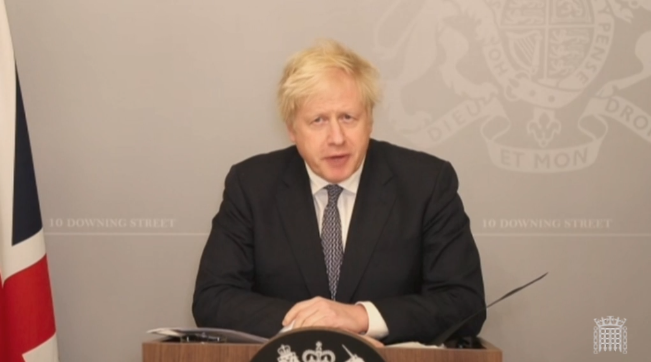 All retail and gyms will reopen on the 3rd December in England as well as communal worship and sport but the Tier system will be stronger with all hospitality shut in Tier three and alchol to be served only in Tier 2 with substantial meals.

The Prime Minister says incidence remains widespread in may areas – so measures will not be replaced by a “free for all” but a regional approach and added that the previous tiered system were not strong enough, so the scientific advice as we come out of lockdown is that tiers should be made tougher.

Hairdressers will be allowed to operate and more people will be allowed to form support bubbles under a change to the rules that allow two households to mix indoors. Parents of those under one year old, and couples in which one member is a carer, can join another household under the new rules.

The regions will fall, at least temporarily, into higher levels than before but by using tiers and rapid testing it should be possible for areas to move down the scale to lower levels of restrictions.

It will be announced on Thursday which regions fall under which tier and tiers will be reviewed every two weeks. He also confirmed that the government is working with the devolved administrations to allow people to meet at Christmas.

Johnson said all local authorities in tier three restrictions in England will be offered a six week surge in testing which, if it works, should offer people who test negative a chance to escape some of the most severe restrictions.

This follows the mass testing pilot in Liverpool, which will also see a pilot starting over the next week to cut self-isolation periods from two weeks based on daily testing.

Testing will also be offered to care home staff and health workers and the Prime Minister promised that rapid tests will allow two visitors to meet face to face.

Sir Kier Starmer said in reply to the Prime Minister’s statement that says a return to a three-tier system is “risky”.The previous three-tier system did not work and areas kept going up into higher tiers, without coming down.

He asks if areas will be consulted about which tier they go into and how long will areas stay in a tier and will there be a new economic package for firms in the new tiers?

“Positive news of vaccines offers a ray of light for 2021. But the next few weeks and months will for many feel like purgatory – stuck in limbo between a national lockdown and a new normal.

“The speed of recovery will depend on the resilience of firms. Today’s announcements bring more consistency and clarity, which helps support business planning and protects jobs. As the crucial festive period approaches, adapting curfew and opening more of the economy will also be a boost for many.

“But harsh measures and ongoing closures will continue to risk business failures in many sectors. For firms wondering what restrictions they will face, details of regional tiers must be laid out in detail on Thursday and regularly reviewed in the future.  Further commitment to financial support will still be needed for thousands of struggling companies – particularly those in higher tiers still looking into the precipice.

“The combined efforts of business, government and society should now focus on helping restrictions ease, not tighten once more. A six-week mass, rapid testing surge could be a game changer. It should be backed with a Christmas that gives much needed family time, while avoiding an economic hangover in January.

“The country is now well drilled in managing restrictions. With a calm, consistent and co-ordinated approach across all the UK regions and nations the end of the year could mark the beginning of the fight back.”

Empty buildings opened up as overnight shelters for rough sleepers