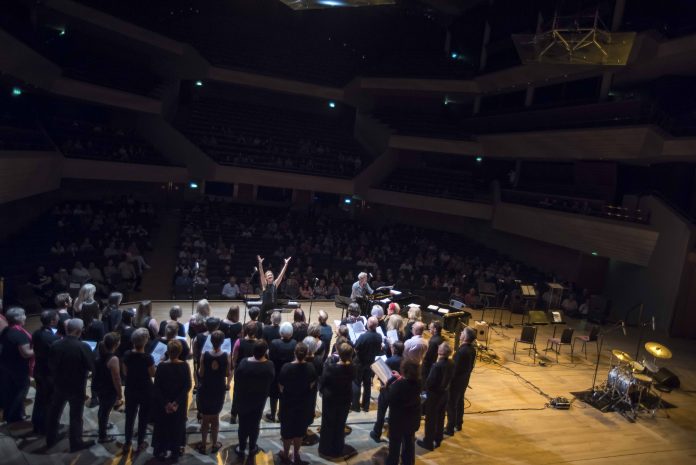 his week marks 25 years since Her Majesty the Queen officially opened the Metrolink network during a special ceremony at St Peter’s Square. To recognise this significant anniversary, pop-up musical performances appeared across the tram network on 17 July to entertain passengers.

In celebration of Metrolink’s silver jubilee year, Transport for Greater Manchester (TfGM) joined forces with The Bridgewater Hall – which celebrates a 21st birthday later this year – to deliver this innovating and engaging musical project, Tram Tracks.

The project, which culminated in two gala concerts earlier this month, sought to truly reflect the diverse communities across Greater Manchester and how those communities’ lives have been changed by the tram since its inception.

93 new and bespoke pieces of music – each one representing a stop on the vast Metrolink network – were created by more than 1,200 participants from community, school and youth groups, local businesses and partner organisations across the city region.

Councillor Andrew Fender, Chair of the Transport for Greater Manchester Committee, commented: “I have vivid and very fond memories of the Queen’s visit and can’t quite believe it was 25 years ago. It’s fitting that a selection of music, created through the Tram Tracks project, was performed on the network for all to enjoy, marking the occasion.

“Tram Tracks has been a wonderful and engaging project; to have 1,200 people from a wide array of community groups all coming together to create 93 pieces of bespoke music is something truly special.”

“I would like to congratulate each participant and the vast team of community songwriters, composers, arts organisations, education providers and musicians from across Greater Manchester who have helped to create this outstanding project. I would also like to thanks The Bridgewater Hall Community Education Trust for helping to make this project happen.

“Tram Tracks is one of the largest and far reaching creative engagement projects we have undertaken in recent years and we hope to develop lasting relationships with the participating groups, and to inspire communities across Greater Manchester to creatively engage with their local area.”

From Monday 17 July, all 93 tracks are also available to listen to for free.