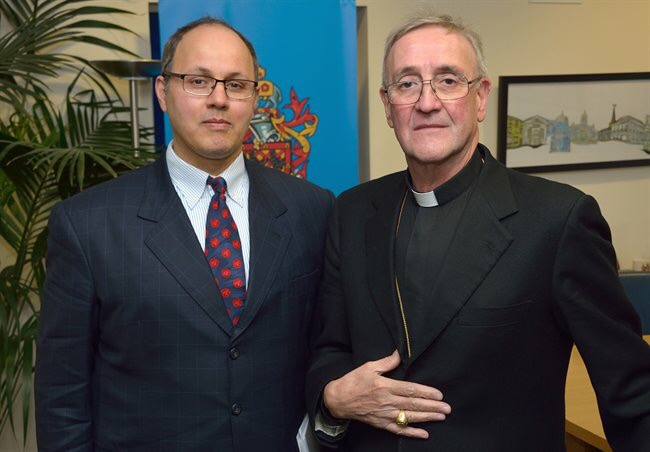 Pope Francis’s diplomatic representative in Britain, His Excellency Archbishop Antonio Mennini, delivered a message of harmony between faiths in a message from the Pope, delivered at an event hosted by the Centre for Islamic Finance at the University of Bolton.
Archbishop Mennini, the Apostolic Nuncio to Britain, was speaking on Tuesday (26 April 2016) on the subject of ‘The Catholic Church and Islam: a message of peace and love from Pope Francis’.

In his welcome, the Director of the Centre for Islamic Finance, Professor Mohammed Abdel-Haq told the audience of his pride that CIF had been chosen for the Pope’s message. He said inclusivity and understanding between culture and faith were central to CIF’s mission.

Archbishop Mennini said love and peace between Muslims and Christians had never been more important in the world and education was central to Pope Francis’s thoughts on how we can all support the next generation to understand that justice and peace, truth and freedom are intrinsically linked. ‘It is our duty that this should be understood by the young themselves,’ said Archbishop Mennini.

‘It is in the future generations that we place our most beautiful hope.’

Referring to Pope Francis’s recent visit to Lesbos, Archbishop Mennini said, commenting on the families who had come to stay as his guests in the Vatican City, we are all the children of God, he said, and we should recognise our interdependence and that we share the same destiny.

Said Archbishop Mennini: ‘Love and peace between Muslims and Christians is more important than ever. We must respect the Muslims coming to our country in the way we would wish to be treated in their country.’ According to Archbishop Mennini: ‘God will always win and men of goodwill will be supported by his grace.’

Thanking Archbishop Mennini for his message from Pope Francis, the Vice Chancellor, Professor George E Holmes DL said the University of Bolton was the most socially inclusive university in Britain with 35 per cent of students from ethnic minority backgrounds, of which 30 per cent were of Islamic faith.

‘We have a very rich and diverse culture where, if we don’t bare authentic witness to respect and recognise each others’ ideals, we would not survive, never mind thrive in the way we do in this region. We play our part and that is a great privilege for this university.’

Natasha will be running the London Marathon to thank the stranger who saved her...