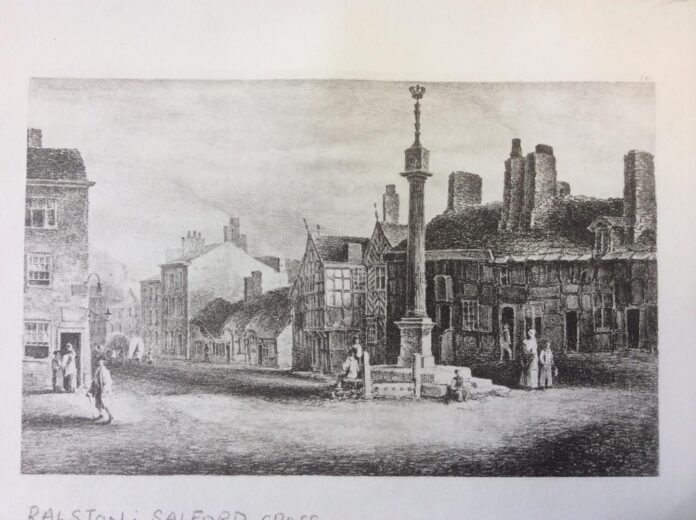 The old Salford Cross once stood outside the court house on Greengate until it was taken down in 1824.

Nobody is quite sure when it was erected but it was marked on the first map of Manchester which dates from around 1650.

The only images that survive are a drawing by the artist John Ralston made in 1812 as he sketched iamges of the changing face of the region.

It was a tall single column placed on a base of three steps topped with a crown.The stocks were placed next to it.

The cross is first mentioned in writing from the time when Methodist arrived in Salford.John Wesley preached from its steps in 1747 and wrote in his diary of the occasion.

“I walked straight to the Salford Cross.A numberless crowd of people partly ran before and partly ran after me.I thought it best not to sing but asked “Why do you look at though you have never seen me before? Many have seen me in the neighbouring church (thought to be Sacred Trinity) both preaching and administering the sacrement….I then began and as I was drawing to a conclusion, a big man thrust in with three or four more and bade them to bring out the engine.Our friends desired in me to remove into a yard just by which I did and concluded in peace

In 1821 just three years before it was taken down it was the site of tumultuous celebrations surrounding the Coronation of George IV being  one of the appointed stations for the roasting and distribution of oxen and sheep supplemented by loaves of bread and home brewed ale.

Employment tribunal claims backlog set to pass half a million due to Covid, warns...

Thousands of children hospitalised after self-poisoning with drugs and bleach