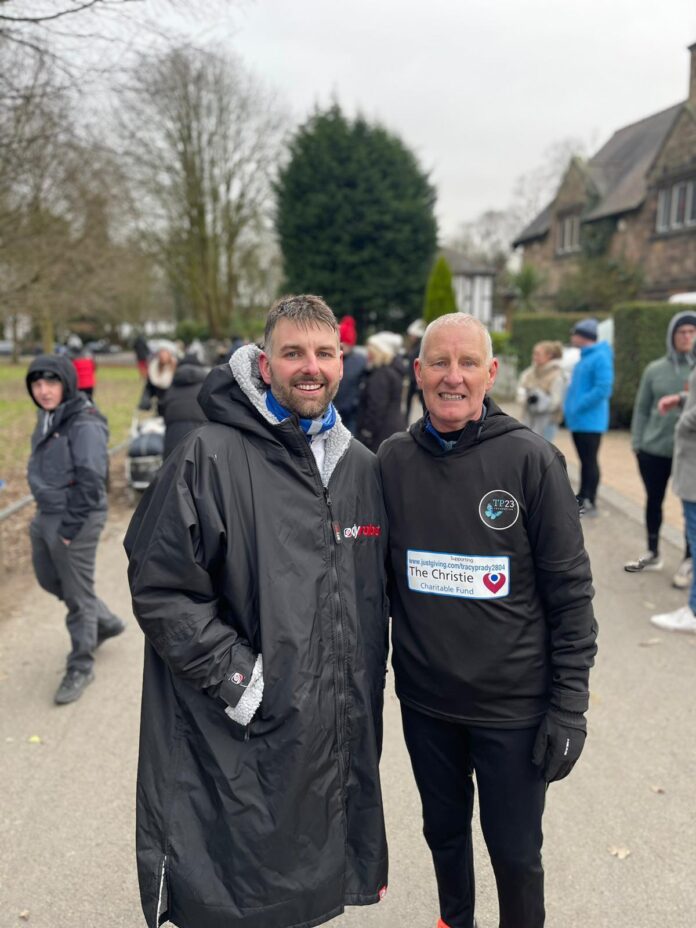 A Worsley man ran an incredible 72 miles in just 24 hours in memory of his mother who died of bowel cancer.

Jack Prady, 32, completed the extremely daunting feat, which worked out at 3 miles every hour, to raise funds for The Christie charity in memory of his mum, Tracy.

Tracy Prady sadly passed away in April last year, five years after being diagnosed with bowel cancer. After being treated by The Christie, Jack decided to raise funds for The Christie charity with an astounding test of stamina.

Jack set off on his quest of endurance, which is almost the equivalent of three marathons in one day, through the streets of Salford and Worsley on what would have been Tracy’s 57th birthday – Friday 12 February.

Jack was spurred on by his Dad Phil, 61, who ran much of the distance with him and was supported all the way by his wife Jade and son, Rocco, four.

Jack, who works as an account manager in facilities management, said: “The run was a real challenge as I’ve never run anywhere near this far before. I usually only run between three and six miles a couple of days a week, but I thought it was important to really push myself mentally and physically, just like my Mum did throughout the course of her cancer journey.

“Despite her physical state being compromised, my Mum’s mentality was always to battle through it, never give up.

“Running was also my go to, in terms of clearing some headspace and re-focus, so it was quite an emotional time out on the run.”

Jack had been in training for a few months for the challenge, clocking up around 50 miles a week. Tracy’s family and friends have already raised more than £11,000 in her memory with Jack hoping to add to that total.

Jailed for three years-Man who set up small buisness in Oldham to lure teenage...