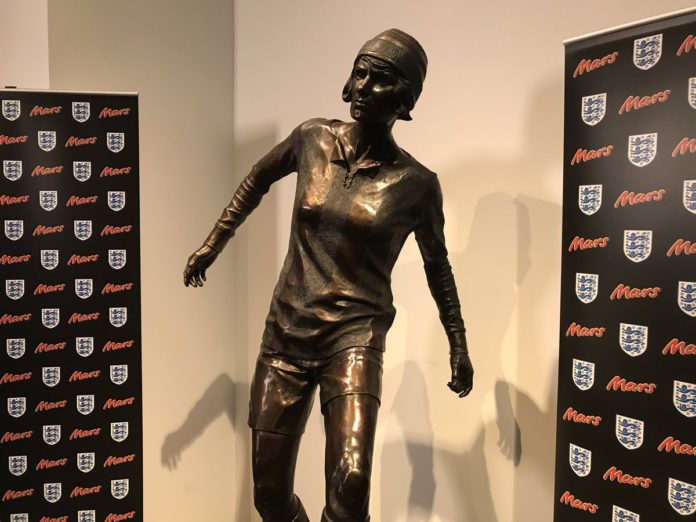 The statue of women’s footballing legend Lily Parr has been unveiled at Manchester’s National Football Museum.

The life-size bronze statue, created by sculptor Hannah Stewart, was commissioned by Mars to inspire the England Lionesses ahead of this summer’s tournament.

Lily Parr, an outside left winger who scored over 980 goals in her 32-year career, was reputed to possess one of the most powerful shots in football, and had the ability to score goals from extraordinary angles with a left foot cross drive with immense skill and power.

Starting her career at Dick, Kerr Ladies FC as a full-back 100 years ago aged just 14, Lily moved to the left wing in 1921 and scored an impressive 108 goals in her first year in this position. Her steely determination to be the best footballer worldwide saw her spend hours on her own perfecting the technique of her almighty power kick, as many other legendary kickers have gone on to do.

Marzena Bogdanowicz, Head of Commercial and Marketing, Women&#39;s Football at The FA said:

“Women’s football is in a very strong place today with the England team helping us to drive
participation and interest at every level. We have come a long way since Lily Parr’s days and she deserves recognition as a true pioneer of the sport.

“Lily Parr was the first woman to enter the Football Hall of Fame, an iconic achievement in itself, so it’s only fitting that she takes her place alongside other football legends and becomes the first woman to be celebrated with a statue in her honour.”