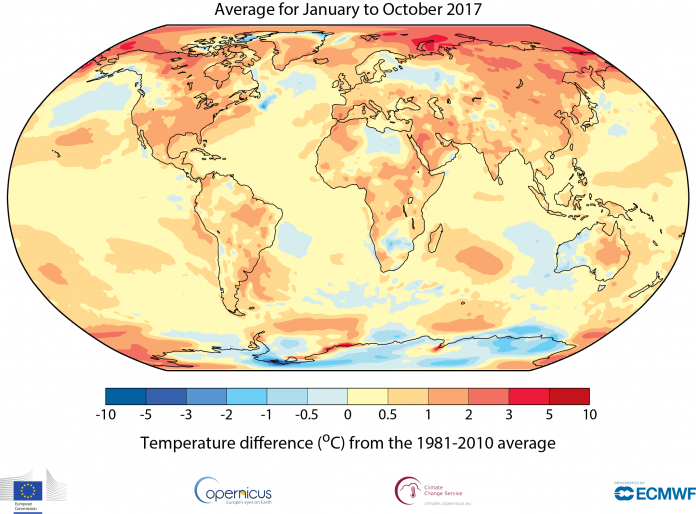 It is very likely that 2017 will be one of the three hottest years on record, with many high-impact events including catastrophic hurricanes and floods, debilitating heatwaves and drought.

That’s according to a report out from the World Meterological Organisation whicg says that long-term indicators of climate change such as increasing carbon dioxide concentrations, sea level rise and ocean acidification continue unabated.

Arctic sea ice coverage remains below average and previously stable Antarctic sea ice extent was at or near a record low this year.

Their annual statement on the climate says the average global temperature from January to September 2017 was approximately 1.1°C above the pre-industrial era.

“The past three years have all been in the top three years in terms of temperature records. This is part of a long term warming trend,” said WMO Secretary-General Petteri Taalas. “We have witnessed extraordinary weather, including temperatures topping 50 degrees Celsius in Asia, record-breaking hurricanes in rapid succession in the Caribbean and Atlantic reaching as far as Ireland, devastating monsoon flooding affecting many millions of people and a relentless drought in East Africa.

“Many of these events – and detailed scientific studies will determine exactly how many – bear the tell-tale sign of climate change caused by increased greenhouse gas concentrations from human activities,” he said.

Patricia Espinosa, Executive Secretary of UN Climate Change which is hosting the Bonn conference, said: “These findings underline the rising risks to people, economies and the very fabric of life on Earth if we fail to get on track with the aims and ambitions of the Paris Agreement”.

“There is unprecedented and very welcome momentum among governments, but also cities, states, territories, regions, business and civil society. Bonn 2017 needs to be the launch pad towards the next, higher level of ambition by all nations and all sectors of society as we look to de-risk the future and maximize the opportunities from a fresh, forward-looking and sustainable development path, “she added.

Extreme events affect the food security of millions of people, especially the most vulnerable. A review of the Food and Agriculture Organisation (FAO) found that, in developing countries, agriculture (crops, livestock, fisheries, aquaculture and forestry) accounted for 26% of all the damage and loss associated with medium to large-scale storms, floods and drought.