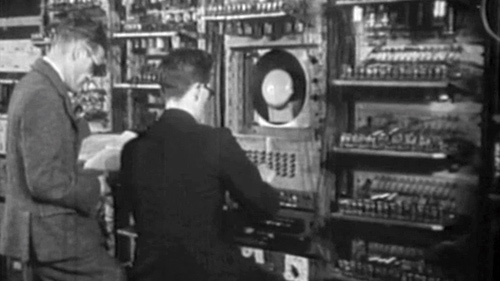 Seventy years ago this week, the world’s first storable programmable Computer was first switched on in Manchester.

It filled a whole room at the University of Manchester yet it had the capacity of an early mobile phone.

Christened  the Small-Scale Experimental Machine by its inventors, Freddie Williams who built the machine and Tom Kilburn, who programmed it, it was soon nicknamed “The Baby”.

The technology had come out of the science developed for communication during the Second World War.

He moved to the University of Manchester in December 1946, to become chair of Electro-Technics, Kilburn, who had worked with him at Malvern,followed him to Manchester early the following year.

Getting the technology to enable electronic storage was crucial to the further development of what was then called Electronic Digital Computers and by the end of 1947,  2048 bits were being stored and an internal report had been written by Kilburn introducing the “dot-dash” and the “defocus-focus” methods of operation of the CRT and the design of a hypothetical computer.

It was built using metal Post Office racks, hundreds of valves or vacuum tubes and the keyboard was a series of push-buttons and switches, mounted vertically, and the output was read directly off the face of a cathode ray tube (CRT).

Its first task wasn’t very exciting by today’s standards, it was asked to determine the highest factor of a number. The number chosen was quite small, but within days the team had built up to trying the program on 218, and the correct answer was found in 52 minutes, involving about 2.1 million instructions .

It was the beginning of the Computer age and now with the technology proven, work began on the Manchester Mark One Machine which was completed the following year and the first commercially available machine,The Ferranti Mark One in 1950, the rest as they say is history.

“A program was laboriously inserted and the start switch pressed. Immediately, the spots on the display tube entered a mad dance.”

“In early trials it was a dance of death leading to no useful result, and what was even worse, without yielding any clue as to what was wrong. But one day it stopped, and there, shining brightly in the expected place, was the expected answer. “It was a moment to remember. This was in June 1948, and nothing was ever the same again.”

None of the original Manchester Baby exists, however, a working replica 5.2 meters long and 1 ton in weight is on display at the Manchester Museum of Science and Industry