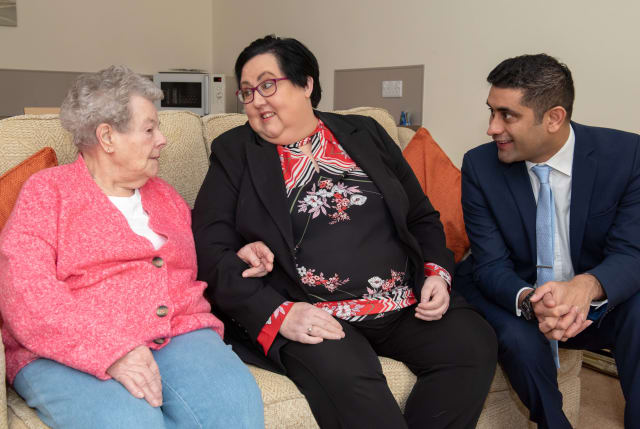 Residents of Bury Council’s flagship housing and extra care scheme have spoken of their delight with their new homes, and how living close to other likeminded people is helping them beat isolation and loneliness.

Offering 14 one-bed and 46 two-bed extra care affordable apartments, Peachment Place in Redvales has just welcomed its first residents. All are already benefitting from the large communal areas, which are designed to encourage social interaction.

This week Bury Council leader Cllr Rishi Shori and the council’s cabinet member for health and wellbeing Cllr Andrea Simpson dropped into the £9.6m scheme, and heard first-hand how much the new tenants like their new places.

The councillors had a cuppa with former bus driver Peter Foran, aged 72, who moved to Peachment Place from a flat in Radcliffe. He suffered crippling loneliness following the death of his partner last year, and felt isolated in the community he’d lived and worked in for many years.

He said: “I would shut my door on a Friday night and wouldn’t speak to a single soul until Monday morning. I’m really a people person so it was tough for me, there was just no one around to talk to.

“It’s different here at Peachment Place, people can come to communal areas and spend time together, or if they want their own space they have a nice apartment to go back to. It’s a good set-up and even in these early days there’s always someone about to have a natter to.”

To further reduce isolation an easily accessible bistro and a hairdressing salon will soon open on-site, both of which will also be available for the public to use. An official events calendar is also planned for residents, with activities including bingo, quizzes and cinema nights.