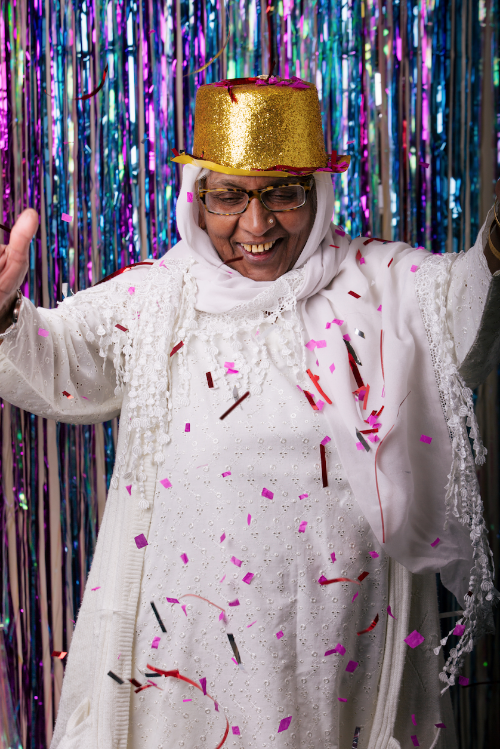 Salford based arts company Art with Heart invite you inside The Golden Years Caravan; a roving cinema and art gallery, to experience a series of ambitious artworks which confront common perceptions of ageing and retirement.

A collaboration between award-winning Art with Heart, local artists and 50 retired people, The Golden Years Caravan is an intergenerational arts project which provides a space for older residents to learn new skills and create high quality art to be shared in their local communities.

Tired of the mainstream media’s portrayal of older people as grumpy Grandad’s, passive pensioners and senile seniors, Art with Heart set about changing the conversation, by creating a space to combat negative stereotypes and offer a new perspective on what it means to grow older in Greater Manchester in 2019.

Creative Director of Art with Heart, Rachel Moorhouse said, “Manchester has developed a reputation for revolutionary music movements, innovative industry, progressive politics and a world class arts scene. Many of those who laid the foundations are growing older in our towns and cities. Far from fading away, Manchester’s retired community is packed full of pro-active, passionate, curious creatives, and we’ve been privileged enough to work with 50 of them!”

Conceived and curated by Art with Heart, who are Associate Artists at The Lowry, The Golden Years Caravan will feature a This is Our Time short film made by Manchester based filmmakers Thirty Pound Gentleman and neighbours from charity Manchester Cares. As well as Old Stock, New Stock, a photographic exhibition by Salford based photographer Joe Smith and women from Ambition for Ageing in Rochdale, and textile artworks by Theatre Designer Irene Jade and craft groups in Salford.

Lauren Banks from Manchester Cares said, “Our older neighbours are incredible; and The Golden Years Caravan has provided some of them with an opportunity to share their many talents. Jim, Artist, Poet and Photographer, aged 90, left school without any qualifications, accessing further education much later in life. When he enrolled at Salford University, the admissions system didn’t reach as far back as 1929. The University had to alter its administrative system for Jim. Our elders are changemakers!”

Research by the Royal Society for Public Health, Vision Voice and Practice and Calouste Gulbenkian Foundation found that 72% of over 60’s agreed they are “always optimistic about [their] future”, and 70% “expect more good things to happen to [them] than bad”. Far from ‘past it’, Greater Manchester’s older generation are just getting started; pop along to The Golden Year’s Caravan and see if you can keep up!

The Golden Years Caravan has been made possible by the generous support of The Lowry, Greater Manchester Combined Authority and Great Place GM; a national Lottery Heritage Fund and Arts Council England initiative.