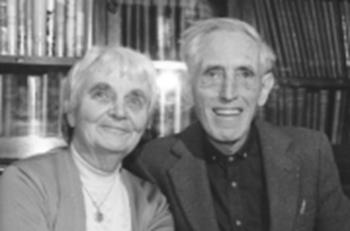 On Saturday 11 November from 2 to 5pm the Working Class Movement Library (WCML) will be remembering its founders, Ruth and Eddie Frow, at an already sold-out event to celebrate thirty years since the library moved to its current home in Jubilee House on The Crescent, Salford

The Library was founded by Ruth and Eddie Frow – active members of the Communist Party of Great Britain – in their home in Old Trafford in the 1950s. Eddie was an engineering worker, Ruth was a teacher.

In November 1987 the WCML moved to its current location at the invitation of Salford Council.  The Library is now recognised at one of the most important collections on working class history in the country, comprising tens of thousands of rare books, pamphlets, prints, banners, photographs and many other items.  Eddie Frow died in 1997, Ruth Frow died in 2008.

The event is entitled “The Point is To Change It”….Remembering Ruth and Eddie Frow.  The title is a reference to something Karl Marx  wrote in 1845: “The philosophers have only interpreted the world, in various ways; the point is to change it” – Theses on Feuerbach.

The afternoon will include contributions on Eddie’s role as an activist in the National Unemployed Workers’ Movement in the 1930s; Ruth’s role as teacher and activist in the peace movement of the 1950s; the activities of the Young Communist League; as well as poems and songs. There will also be an opportunity for audience members to contribute their own memories.

Michael Herbert, a trustee of the WCML, said: “We thought it important to remember that our founders, Ruth and Eddie, were both political activists and historians. They saw socialist politics and working class history as indivisible and believed that you could only create a better future by remembering and analysing the past.”

Could Salford produce another Shelagh Delaney?