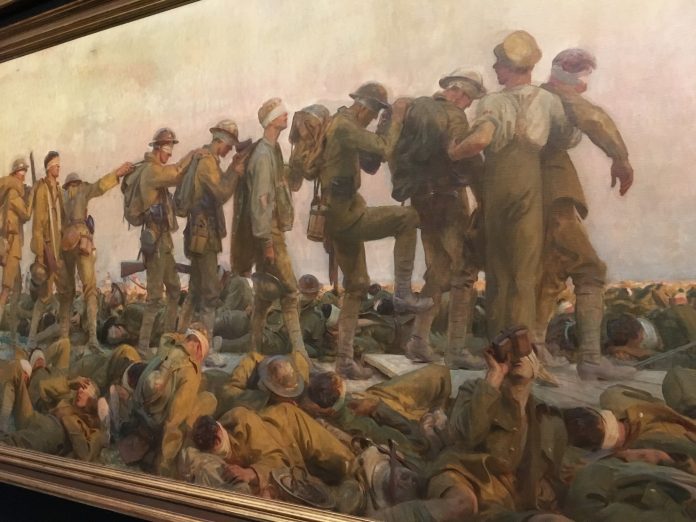 At the end of the exhibition, visitors are asked to vote on the question whether we should always remember the Ist World War

The alternatives are, Yes always, yes,the war may fade with time, no,we need to move on, no, remembrance glorifies war.

The Imperial War Museum North’s exhibition Lest we Forget which opens today Friday, attempts to answer that question with the 100 year anniversary of the end of World War Onw approaching, it takes a look at the deeper stories behind the memorials, rituals , symbols and ceremonies we think we are familiar.

The First World War was a conflict in which the merciless modern weaponary deployed had not prepared the public or the army for the scale of death, this was supposed to be over by Christmas with the victorious Allied armies reaching Berlin in time for the festivities.

As Kipling wrote in 1919 “resting places are situated on every conceivable site,on bare hills flayed by years of battle, in orchards and meadows,……”

The deaths were reported home in bluntly worded telegrams,there is a collection here at the exhibition, a telegram to Eric Heatons family missing believed killed on the first day of the battle of the Somme, the family thrown into  uncertainty for months, before they later received an account from a comrade that he was seen bleeding very badly Nd must have bled to death

Long before the war finished plans were being laid for the formal resting place of those killed,the decision not to repatriate the bodies home created some fury with the relatives, out of that came the idea of the un known warrior,a randomly and unidentifiable British soldier returned from his battlefield grave in 1920.

Britain’s armies were overwhelmingly made up of volunteer or conscript citizen soldiers and during the 1920’s ten of thousands of local memorials appeared across Britain.

Their unveiling would be major occasions for the communities while hundreds of thousands of families were gifted the pass produced bronze plaque with a message from the king.

Then came the annual 11th November commemorations ,the silence even back in 1919 atttractes criticism, Evelyn Waugh described it as a “disgusting idea of artificial nonsense and sentimentality, a disgraceful day of national hysteria.”

Ninety eight years later Simon Jenkins would use the same language describing the 11th day of the 11th month which had become as a synthetic festival whose time had passed.

The Red Poppy first appeared in 1921, today it is almost warn as a badge of honour, its advocacy by celebrities, sports stars and politicians endures,it has been damned by some as a political statement.

Then there is the part that remembrance plays in our culture, the war poets are still a staple in our class rooms across the country,here in the exhibition is the original signed copy of Sassoons Memory, tellingly at the end of the exhibition is the Joey puppet used in War horse perhaps how we see The Great War today.

But here to are paintings, Paul Nash’s collosal Menin Road showing the route into the Belgium town of Ypres completely obliterated, a pure scene of apocalypse and John Singer Sargents Gassed,first displayed in public in 1919 it’s realism so great that people felt physically ill at the sight of the mass of wounded bodies.

At the end of this poignant and moving exhibition you will be able to answer the question.