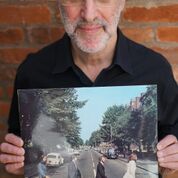 September 2019 marks the golden anniversary of the Beatles’ multi-platinum album Abbey Road – the last work they recorded before their seismic breakup. Released in September 1969, it was the end of both the Sixties and the biggest and greatest band of all time.

To explore this anniversary, the world’s leading Beatles historian, Mark Lewisohn – whose highly-acclaimed Tune In is the first part of the band’s definitive biography – will embark on a 21-date UK tour with his newly-created Abbey Road show Hornsey Road.

This two-hour live theatre presentation – full of surprises, delights, humour and excitement – will be a swift and smart illustrated history of our forever national-heroes the Beatles and their biggest album Abbey Road, providing a unique insight into the band who changed the course of culture and whose influence is still substantial.

Hornsey Road illuminates Abbey Road from every angle, telling the stories behind the songs and the lives of its four creators, John Lennon, Paul McCartney, George Harrison and Ringo Starr – the youngest of them just 26, the eldest 29 at the time it was made. The show will explore the many momentous events that occurred during its recording, when the Beatles were creatively together inside the studio but falling apart outside. This was the year of their breakup, and the album was made at a time of turmoil in their personal and business lives, when two of them were newly married and the band lost business assets and couldn’t agree on future direction.

Mark Lewisohn has the world’s best archive of Beatles materials, harvested over 40+ years of unrivalled deep access to public and private collections. On stage he will be talking audiences through a stunning array of strong and relevant content, with rare music, photos, films and collectable artefacts.

Mark comments: “Hornsey Road is all about Abbey Road, the people who made it and the time in which they did it. This artistic triumph was created at a hectic junction in the Beatles’ lives, and I’m going to be revealing the rich history, refreshing the remarkable stories behind its making, and bringing it all back by sight, sound and smell. I’ll be delivering an original and surprising look at this collection of great songs, superbly recorded by the Beatles and their producer George Martin fifty summers ago, and packaged in that highly-imitated cover art of the four of them on the zebra crossing in north London. I’ll be explaining the album’s making in the context of the 1969 contemporary music scene, and depicting the four Beatles as friends, bandmates and artistic individuals at the peak of their creative powers, crowning the many precedent-setting events of their previous six years together with this glorious parting shot.”

The favourite Beatles album of many, praised by the Daily Telegraph as “lush, rich, smooth, epic, emotional and utterly gorgeous”, Abbey Road wasn’t just another triumphant chapter in the Beatles’ unparalleled time together, it was their best-selling and last-created work, regularly voted high among the greatest albums of all time. Still now, half a century on, it remains a remarkable collection of tracks, ripe for the deep celebratory dive that Hornsey Road will deliver.

All performances at 7.30pm

The power of Placebo