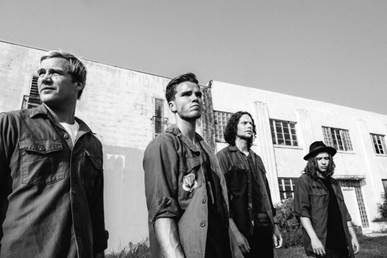 Elektra/Atlantic recording artists Kaleo are heading out on a UK tour this month including a headline show at Manchester O2 Apollo on Tuesday 31st October.

Elektra/Atlantic recording artists Kaleo have just served as direct support for The Rolling Stones across three upcoming European dates. The band played performances in Hamburg and Munich, Germany (September 9th and 12th) which preceded a previously announced opening set at “Next To The Red Bull Ring” in Spielberg, Austria on September 16th.

Kaleo’s support of the iconic group came in the midst of Kaleo’s own headline tour – “The Kaleo Express” – which kicked off August 25th at Anaheim’s House of Blues.

On August 26th, the band’s performance at Los Angeles’ The Wiltern Theatre was captured for an upcoming episode of “Last Call With Carson Daly,” set to air September 13th.  “Last Call” comes in a series of late night and morning show visits for the band, including “Jimmy Kimmel Live!,” “Late Night with Seth Meyers,” “Conan,” “The Late Late Show with James Corden,” and most recently, “Good Morning America.”

As “The Kaleo Express” tour continues, the band will perform in other major cities coast-to-coast, with two nights at Denver’s The Paramount Theater (one of which has already sold out), Austin’s The Moody Theater, and iconic New York City venue The Hammerstein Ballroom. Singer/songwriter ZZ Ward, Wilder and The Shelters will support on select North American dates and Judah & The Lion will support on select international show dates.

The fall tour comes on the heels of the band’s performances at the biggest festivals of the summer – including Lollapalooza, Bonnaroo, and Coachella – as well as performing at European festivals such as Denmark’s Tinderbox.

For complete details and ticket information, please log on to www.officialkaleo.com.